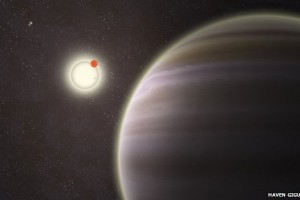 Astronomers have found a planet whose skies are illuminated by four different suns - the first known of its type.

The distant world orbits one pair of stars and has a second stellar pair revolving around it.

It remains a mystery how the Neptune-like world avoids being pulled apart by the gravitational forces generated its four stars.

The find was made by volunteers using the Planethunters.org website along with a team from UK and US institutes.

The planet, located just under 5,000 light-years away, has been named PH1 after the Planethunters.org website.

It is thought to be a "gas giant" slightly larger than Neptune but over six times the size of the Earth.

"You don't have to go back too far before you would have got really good odds against one of these systems existing," Dr Chris Lintott, from the University of Oxford, told BBC News.

"All four stars pulling on it creates a very complicated environment. Yet there it sits in an apparently stable orbit.

That's really confusing, which is one of the things which makes this discovery so fun. It's absolutely not what we would have expected."